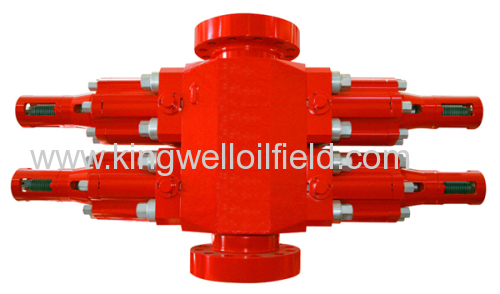 A blowout preventer is a large, specialized valve or similar mechanical device, usually installed redundantly in stacks, used to seal, control and monitor oil and gas wells. In addition to controlling the downhole (occurring in the drilled hole) pressure and the flow of oil and gas, blowout preventers are intended to prevent tubing (e.g. drill pipe and well casing), tools and drilling fluid from being blown out of the wellbore (also known as bore hole, the hole leading to the reservoir) when a blowout threatens. Blowout preventers are critical to the safety of crew, rig (the equipment system used to drill a wellbore) and environment, and to the monitoring and maintenance of well integrity; thus blowout preventers are intended to provide fail-safety to the systems that include them.

Most blowout preventer (BOP) stacks contain at least one annular BOP at the top of the BOP stack, and one or more ram-type preventers below.

A ram type BOP is similar in operation to a gate valve, but uses a pair of opposing steel plungers, rams.

The rams extend toward the center of the wellbore to restrict flow or retract open in order to permit flow. The inner and top faces of the rams are fitted with packers (elastomeric seals) that press against each other, against the wellbore, and around tubing running through the wellbore. Outlets at the sides of the BOP housing (body) are used for connection to choke and kill lines or valves.

Pipe rams close around a drill pipe, restricting flow in the annulus (ring-shaped space between concentric objects) between the outside of the drill pipe and the wellbore, but do not obstruct flow within the drill pipe.

pipe rams, but typically with some loss of pressure capacity and longevity.

Blind rams (also known as sealing rams), which have no openings for tubing, can close off the well when the well does not contain a drill string or other tubing, and seal it.

Shear rams cut through the drill string or casing with hardened steel shears.

Blind shear rams (also known as shear seal rams, or sealing shear rams) are intended to seal a wellbore, even when the bore is occupied by a drill string, by cutting through the drill string as the rams close off the well. The upper portion of the severed drill string is freed from the ram, while the lower portion may be crimped and the "fish tail" captured to hang the drill string off the BOP. 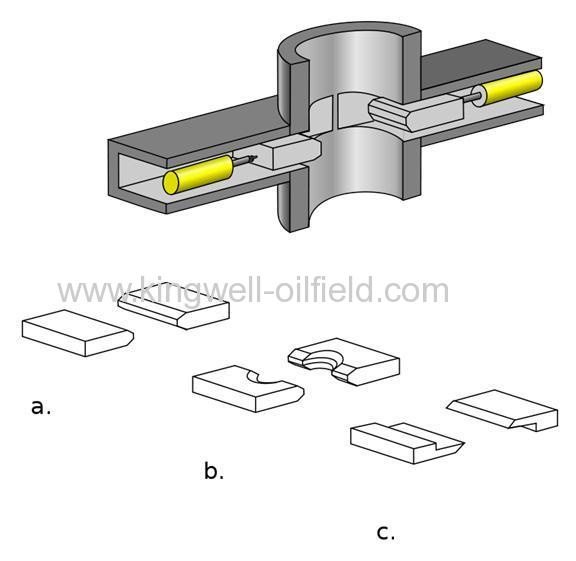 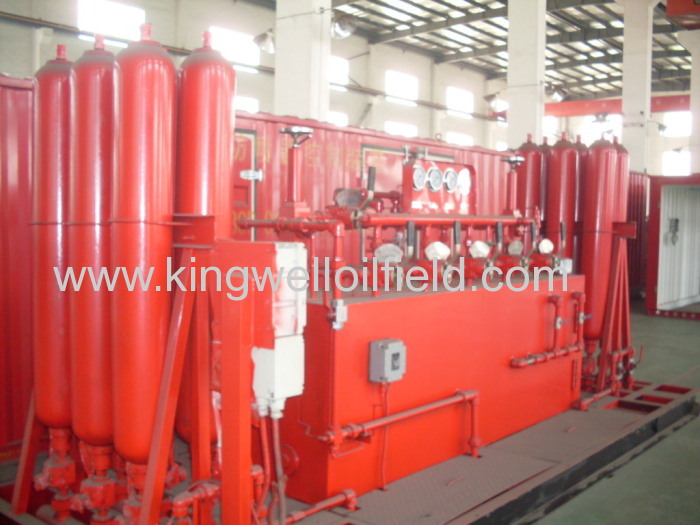 With over 10 years developing, we were developed from the beginning drilling service to manufacture factory who produce OCTG, drilling tools, DST tools and Solid control products.

KINGWELL have experienced team, stronger enough to meet any challenge, we do believe honest is the base of business and cooperation; our aim is to build solid relationship with any part of honest. kingwell can provide highly efficient services to its clients resulting in accurate and timely deliveries at the best prices. Our products have been exported to Europe, American and Middle East.