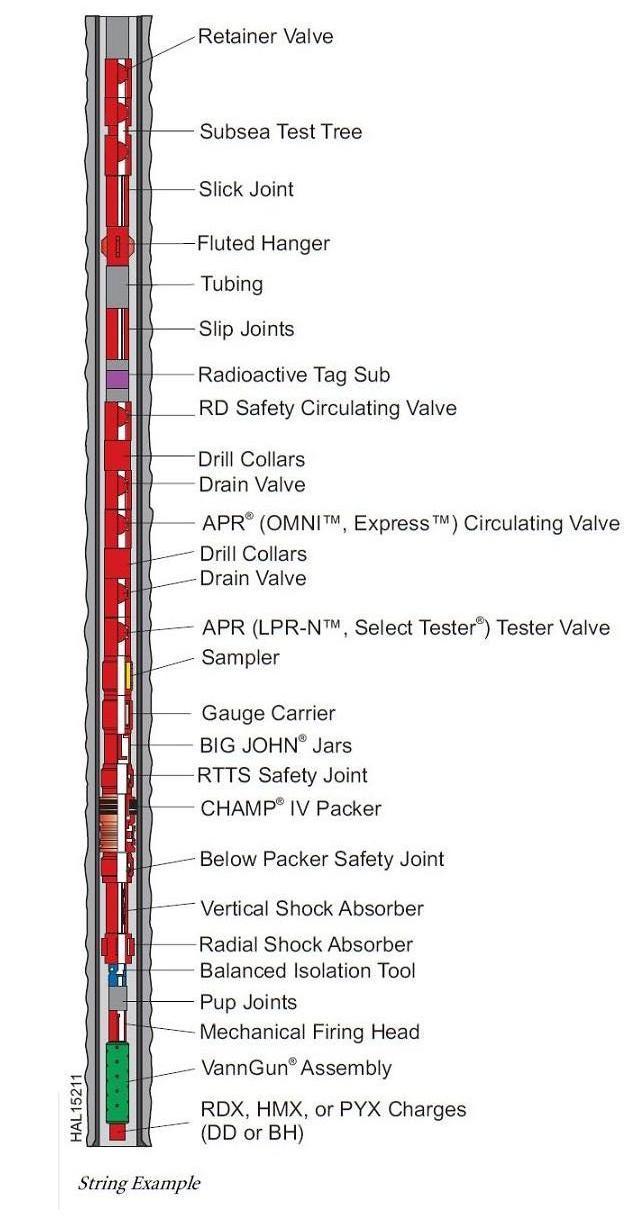 f the geologist detects the presence of oil or gas in the drill cuttings, a drill-stem test is frequently performed to evaluate the formation or zone from which the oil show was observed. Drill-stem tests may also be performed when the driller observes a decrease in the time required to drill a foot of rock, known as a "drilling break." Since porous rock may be drilled easier than nonporous or less porous rock, a drilling break indicates the presence of porosity, one of the qualities of reservoir rock. A drill-stem test enables the exploration company to obtain a sample of the fluids and gases contained in the formation or interval being tested as well as pressure information, which is determined by special gauges within the test tool.
Drill-stem testing is accomplished by removing the drill string from the bore hole. The drill bit is removed and a drill-stem test tool with a packer is attached. The test tool, packer, and drill string are inserted back into the bore hole to the desired depth. The packer, which is an expandable device, is set and expanded at the predetermined depth to isolate the zone to be tested. The test tool contains a valve which may be opened and closed to allow formation fluids to enter the test tool and drill string. If there is sufficient fluid and pressure within the zone being tested, the formation fluid (oil, gas, water) may rise to the surface and flow into special test tanks used for that purpose. If gas is present, it is burned at the surface as a flare. By analyzing the rate of flow or the amount of formation fluid recovered in the drill string and the formation pressures recorded, obtaining a good indication of reservoir characteristics such as porosity, permeability, and the nature of the fluids or gas contained therein is possible.